"Nebraska Before Nebraska: Our Pawnee Homeland"

The 2017 lecture examined Nebraska from a Pawnee Indian perspective. The Central Plains is the ancient aboriginal homeland of the venerable Pawnee Nation, the oldest known inhabitants of this corner of Mother Earth. When the World was young, the Great Spirit's Sea of Grass gave rise to one of the world's founding Buffalo Cultures. Echo-Hawk will chronicle that long span of Great Plains history, including ten generations of his family. When viewed through Indigenous Eyes, the American Heartland is a far more exotic place than imagined; and that perspective provides greater and deeper appreciation for our common homeland.

The Pawnees lived in the Loup and Platte River Valleys hundreds of years before Europeans arrived in North America, but they were removed from Nebraska in 1876.  The Echo-Hawk family is distinguished for its contributions to Pawnee Nation and the State of Oklahoma.  In that tradition, Walter Echo-Hawk is a noted attorney, author, and speaker with expertise in indigenous history, federal Indian law, and Native American cosmology. 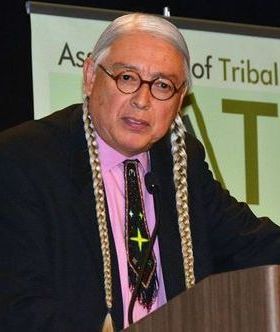 Author, attorney and legal scholar Walter Echo-Hawk (www.walterechohawk.com) was the inaugural “Walter R. Echo-Hawk Distinguished Visiting Scholar” at Lewis & Clark Law School for 2015. He authored In The Light Of Justice: The Rise of Human Rights in Native America and the UN Declaration on the Rights of Indigenous Peoples (2013); In the Courts of the Conqueror: The 10 Worst Indian Law Cases Ever Decided (2010); and Battlefields and Burial Grounds (1994). He is a Pawnee Indian with a BA, Political Science, Oklahoma St. Univ. (1970); and JD, UNM (1973).

Echo-Hawk currently practices law in Oklahoma. He is Chair, Board of Directors, Association of Tribal Archives, Libraries and Museums (www.atalm.org). As a staff attorney of the Native American Rights Fund (1973-2009), he represented Indian Tribes, Alaska Natives, and Native Hawaiians on significant legal issues in the modern era of federal Indian law, during the rise of modern Indian Nations in the tribal sovereignty movement. He litigated indigenous rights pertaining to religious freedom, prisoner rights, water rights, treaty rights, and reburial\repatriation rights. Echo-Hawk is admitted to practice law before the US Supreme Court, Colorado Supreme Court, Oklahoma Supreme Court, Courts of Appeals for the 8th, 9th, 10th and District of Columbia Circuits, Federal Claims Court, and several US District Courts.